Convergence is upon us again.  It's 5 weeks away.  Do I have my costume?  Sort of.

Last year I was thinking about getting a Prince Adam costume.  It looks good, and suits in general look good on heavier people.  Plus a major release of a new live action Beauty and the Beast was planned in the next year.  That makes it topical, but it also means you can expect some Belle's.

Then around January I went to buy one, and realized that Prince Adam would have a different outfit in the new movie.  Did it look better?  Even if it did, what if the movie sucked, or had some sort of controversy?  I held off.

Then, February first I started losing weight again.  So far I've lost 18 pounds in 18 weeks.  At this point I'm less than 25 pounds overweight, and can expect to lose another 5 before the convention.  My chest has also gotten a slightly better shape because of all the push ups.  So where does that leave me?

The charts say my ideal weight is 156.5 pounds, and my current weight is 179.  If I lose 5, that will make me 18 pounds overweight at the time of the convention.  Is that low enough to wear a lycra Venom suit?  Maybe. 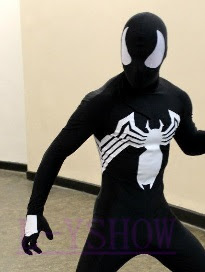 But what if I can lose 10?  10 pounds in 5 weeks is doable, and not unhealthy.  And is my ideal weight 156.5 pounds?  My chest is 44.5 inches.  It looks to me like the average man has a 34.5 inch chest.  Maybe my ideal weight is a little higher.  If I got within 10 pounds of my ideal body weight, and hadn't gone with something a little more form fitting, I'd be kicking myself. 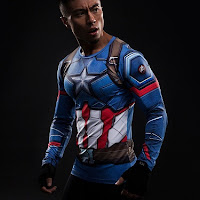 In addition, I got some digital print superhero shirts.  They're cheap, and will look good at my current weight.  A few of them, and the Venom costume will cost about half of a Prince Adam costume.  Plus my previous year's costumes are looking great.
Posted by Benjamin