Checklists are not Fool-Proof

"He fabricated the completed checklist!"

As you may know, I am a volunteer at my parish, the Basilica. ( See here for the beginning of the story of how this came to be. ) The job entails inspecting the eight side altars in the main church, ensuring they are compatible with the beauty and magnificence of the rest of the church.

A great believer in lists, I asked for a checklist to be sure I look for all the things I am expected to look for. I also use the checklist to report what my inspections revealed. For example, about flowers, there are these possibilities:

As you can see from the figure above, presenting flower data for eight altars is quite compact. I know which altars I've looked at ( in this case, all eight of them ) as well as what I found when I looked.

When finished with the inspection, I have a few things to do to prepare to leave for home; these include returning a key and fob ( that I wear on a lanyard around my neck ) to a drawer, a broom and dust pan ( that I put into my janitor's cart ) to a closet and making sure I have my tote bag
( which I attach to the cart ) in my possession. Having left the church at least once without my tote bag ( and several other times of not being sure I had returned things to where they belong ), I added a "When leaving" section to my checklist. This would assure me I was actually ready to go when I prepared to set foot outside the church.

I was so proud of myself! I would never leave the Basilica again with my tote bag remaining behind or wondering if I had returned things to where they belong.

... but I recall getting to ready to leave one Monday morning. The janitor's cart was back where it belonged. I checked to be sure  all items on my "When Leaving" checklist were checked ( they were ). I put the checklist in my tote bag and was about to set foot for the door when I noticed it.

The lanyard, with the fob and key, was still around my neck. Disbelieving, I retrieved the checklist from my tote bag. It was as I remembered it, telling me I had returned the key and fob to the drawer. 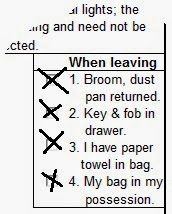 With nothing to gain, I had joined the ranks of surgeons before surgery, pilots before takeoff, mechanics performing maintenance and countless other professionals who had fabricated a completed checklist to mask their failure to properly perform their duties.

I throw myself at the mercy of the court.
Posted by WalterJ No comments:

How to Feed Myself

For eight weeks i've been on this unbelievable 1,800 calorie diet.  Okay, maybe it is believable, but it has been quite a challenge for me.  I used to eat whatever i wanted, an i wanted around 3,000 calories a day.  Just going from no limit to a limit has been the hardest part.

Does your Left Brain know what Your Right Brain is Doing?

Our current writing instructor introduced us to a new form of poetry. I tried it, liked it, and present below, in that form, a poem I introduced you to, in two different versions, earlier this year.

The what did I wear edition.

Unfortunately the Rumpelstiltskin consume did not come together.  I really should have put the whole thing together ahead of time.  I live and learn, and will have more and cooler costumes next year.

"I learned so much from doing those two-hundred, fifty and, finally, six-word autobiographies," I told her. "I've told many people about that exercise."

"Glad to hear it," she said. "We're doing a similar thing tonight, only backwards."

The instructor leading Benjamin's and my current writing class, as mentioned earlier, is one we've had before. Last time, doing it after the longer efforts, I strained to come up with my six-word autobiography. This year she had us begin with the six-word autobiography and asked us to come up with a bunch of 'em. In the five minutes she provided. Being the good student and one who follows instructions well, I put my mind to the task and came up with what I consider some pretty good ones. The next step was to pick one of them and expand on it, as a longer but still brief autobiography. My autobiographies ( random order ):

I chose to expand, "Eventually, with outside help, experienced God," but screwed up the assignment, writing about one specific experience of the outside help. Writing in more detail, I wrote about the posted conversation with Fr Pat from my Jesuit retreat this past spring when the assignment asked for a longer autobiography.

Convergence 2014 is over, and i thoroughly enjoyed myself as usual.  I treat it as a vacation, because it definitely is that.  I used three days of vacation time, and spent about four hundred and fifty dollars.  That's a little more than a hundred dollars a day, which I think is very reasonable for a vacation.  I could actually have saved a little more if i took more advantage of the free food, snacks, and beverages at Convergence, but it can be kind of a hassle.  Plus i don't like feeling like a freegan.

Reflections on having a Smart Phone

“Didn’t you get my e-mail?” she asked with more than a hint of both exasperation and incredulity in her voice.

Behold the smartphone. Wait … no … what? What’s a smartphone? The definition of this device is one capable of communicating via telephone calls and, and here is where the ‘smart’ comes from, sending/receiving email, text messages, surfing the internet and running third party programs.

Being a geek, I thought I should have one. In short order, it was receiving and sending emails and text messages, surfing the internet, and running an application  or two that I had downloaded to make my digital life easier.

I envisioned this device having an effect on my life similar to the effect my tablet had. To wit: got a question? Look it up. The spelling of a word, the definition of a word, the hours of a restaurant you’d just heard about? My tablet had taught me to virtually never leave such questions unanswered … it was always nearby and so much easier to get to and Google with than my desktop. I figured my SmartPhone would be even easier as it would be immediately available even more frequently than my tablet. I did not pay adequate heed to its capability to do those things in a restaurant, in church, at a sports venue, while taking a walk. In short, to do these things anywhere, giving it its capability to change my life.

A small joy I experienced BS ( i.e., Before-SmartPhone ) was, after an evening out with my wife or an excursion to, say, a writing class by myself, coming home and the anticipation as I checked up on my home life. AS ( After-SmartPhone ) I noticed that this sense was quite muted. BS, I would rush to my office computer ( and, later, to my tablet ) and check my email; AS, I’ve done that while out and there was no need to check. BS I had always been kind of excited about voice mail, too … who’d called, what’s new, who wants to talk. We have digital voice mail and send it to our email addresses. AS, been there, checked that, no news. BS, curiosity about the fate of my favorite sports team always drew me to Yahoo Sports on my computer ( later my tablet ) when I got home. AS, I had already checked well before getting home.

It is clearly my use of this device that is removing my sense of anticipation. When out, I could turn the phone off except for emergency use. An emergency of mine, that is. Someone having their own emergency would be out of luck, and I don’t want to do that. So I could respond to just phone calls. But I don’t have the heart to ignore everything but phone calls. On top of that there is the occasional text message or email that is not an emergency, but that I would want to see as soon as possible. I recognize I have cornered myself.

This experience clearly feels like being tethered to my home … isn’t it ironic that my wireless device tethers me? It takes no imagination to think I might have been similarly tethered to my office if I had had one of these when still working. Going home would not have taken me out of the office, and going out for an evening would not have taken me out of my home. It’s not a pleasant thought; it is yet another reason to embrace my retirement.

And … just perhaps ... it reveals that I am much more old-fashioned than I ever would have imagined.
Posted by WalterJ 2 comments:

As I have done many times before,
I am promoting the website of my friend, and self-professed Catholic Geek, Travis. I am providing pictures of churches and cathedrals that he is featuring on his site. Next time I will provide one additional preview and a link to his site, where you can completely explore his image collection.
If you get a chance, stop by one  or both of these. One is in Saint Paul and the other just up I-94 a "piece."