Merry Christmas. Mine went well, and I hope yours did too.

As always, it's the thought that counts. My mother knew I like them, she knew they always sell out locally, and she braved the interwebs to find them for me. She even ordered them in time to have them by Christmas; no small feat for the worlds worst planner.
http://www.nuts.com/chocolatessweets/gummies/gummy-fruits/sugar-plums.html

I hope you all gave and received thoughtful gifts this year.
Posted by Benjamin No comments:

Merry Christmas to all

I am going to be taking the next two weeks off … celebrating the Christmas Holiday. I wish everyone of you a very holy and joy-filled Christmas and a 2104 filled with all good things. 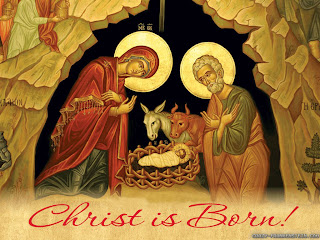 Please drop back the week of January 6.

The Most Thoughtful Gift

You might be thinking that a father giving his son a thoughtful gift is not shocking, but you Sir have never met my father. He's the worst give giver I've ever met. This is a man who is happy to give an expensive gift, but intentionally does a terrible job taking the price tags off so that you know what he spent. This is also the man who gave me a toy beeper when I was thirteen. If you were not a child of the 90's, let me tell you that a real beeper would have been the coolest gift a thirteen year old ever received, and toy beeper meant for a seven year old would be pretty insulting. Now that I've done my best to give you an idea of his failings as a gift giver, let me tell you about the one time he got it right.

I was about seven, and we were attending the Renaissance Festival, which was always a good time. This trip went from good to spectacular when we were approached by a real life wizard, who chose to give me his real life wizard staff. At least that's the way I remember it.

The staff was short and had a top that was not a traditional grip could be used as one. He was using it that way when he approached, so the staff came to about his elbow. When he gave it to me I was stunned into silence, and I think I had to be reminded to thank him. After gifting it to me, I was able to use it like a longer staff, with it coming to about eye level with me. It was beautiful, and curved, and knotted.

This was the perfect gift for a seven year old, presented in the perfect way. Now I'm not saying it wasn't a real wizard staff presented by a real wizard, but some time later I realized my father must have purchased the staff himself, and had the wizard give it to me for effect. It was the most thoughtful gift I ever received, and he gave it even though he couldn't take credit for it.
Posted by Benjamin No comments:

A friend of mine, Travis, with whom I work as a volunteer at the Basilica of St Mary in Minneapolis, is a self professed Catholic geek. ( In a previous post, Making of a Volunteer, I told the beginning of what became the unlikely story of my working with Travis. ) One of the meanings of this is that he is very attracted to churches ... their outside, inside, architecture, windows, statues, paintings, layout, virtually everything about them. When going from point A to point B, he will stop at an interesting church and take pictures ... outside, inside, of the statues, of the paintings, of the windows, of the altar(s), ... ; you get the idea. Sometimes when going from point A to point B, both A and B are churches, too!

I offered to preview some of his favorite pictures on my shared blog. I used the word "preview" because he is putting together a website which will be an exposition of churches in the upper Midwest, but is still some time away. He accepted my offer, with more excitement than I had anticipated, and recently sent me some pictures. Below I preview two of them, along with the explanations he wrote and I edited. I will preview more, scattered among my posts, in the coming weeks.

I love Christmas, and for me a big part of the Christmas fun is gift giving. Money is an important factor of course, but it is the thought that counts. You may say that's a cliche, but I don't think it can be said enough. It seems to me that many don't agree, and even fewer understand it.

I am often told that I give good gifts. I don't spend a lot of money, so I have to assume that I am succeeding in my goal of giving thoughtful gifts. I do recognize that I do this for partially selfish reasons though. I enjoy the hunt for a thoughtful gift, and the glory of basking in my success when I've nailed it.
Posted by Benjamin No comments:

“Ooooohhhhoooh.” … I struggled to maintain the pitch I was trying to sing, as the meeting’s stragglers, members of the parish choir all, stifled their inclination to laugh.

“I think you should take voice lessons from me.”

With that, a dream and a nightmare intermingled.

I had always loved to sing in Church. I enjoyed singing and gave wide berth to my desire. Shortly after getting married, I noticed that my wife, Ellie, at these times, would slink away from me. She did it subtly, but deliberately, and almost always with a furtive glance back to me; it let me know she didn’t really want to be associated with the source of that sound.

I realize I sound dreadful; not easy to admit. There were hurdles to taking voice lessons.

The idea intimidated me; I had visions of failure. I’m not used to failing. I believed that failure here was likely.

I guessed voice lessons were not cheap, and we didn’t have a lot of money to throw around. It was easier to admit that than it was to admit being intimidated.

I knew two people qualified to teach voice. One was Jerry, our parish’s Director of Liturgy .

Not knowing exactly what had gotten into me, I asked Jerry to give me voice lessons. “No.” I figured I had dodged a bullet.

A year later, with no context whatsoever, as the meeting was breaking up, Jerry said to me, “Sing me a pitch … give me your best shot.” I sang ( tried to ) a pitch as described above.
His, “I think you should take voice lessons from me,” made my body quiver; I felt a chill, panic, perhaps. “Think about it. Give me a call when or if you want to pursue it.”

The decision was now mine. Why was I not elated? I knew immediately I would take him up on it; I also knew it would take a while. The intimidation was real.

My intimidating vision was spot on. He asked me to match a pitch he played on the piano. At first I didn’t always even know if I was above or below the pitch. I knew if I lowered my voice and raised it slowly I would, if only for an instant, be matching the note he was playing. This, of course, did not satisfy him. Eventually I could hold my voice steady enough and close enough to the played pitch that we would move on, to another pitch not far removed from the one I just successfully “mastered.” I slowly learned to both hear and feel when my voice and the piano’s pitch were the same. The first song I learned was, “Holy God.”

This excited me; it was learning that transcended mere understanding in my brain. That kind of understanding was insufficient. These lessons became the highlight of my week.

Jerry and I have been going at this for 11 years. Although Ellie no longer slinks away from me in church, I feel barely an advanced beginner. I now learn to sing songs, and sometimes I “get” them fairly quickly. Jerry still has me open virtually every lesson by matching pitches. He still, occasionally, has me sing “Holy God,” to make sure I haven’t forgotten everything I’ve learned.

For dessert, we all went to our friend’s, to introduce our cat-loving son and daughter-in-law to Moonshine and Missy Prissy, our friend’s cats. Introductions went well.

To celebrate our recent Thanksgiving, my wife and I had a dear friend over, as well as our son and his wife. We chatted, had some snacks, drank some wine, and then ate the traditional Thanksgiving dinner. Then the just-mentioned dessert.

The day went as planned, with everybody enjoying all of it. The day is its own cause, but the quiet mingling of the people in our house added energy to my reflection: how much do I have to be thankful for?

As I see it, items to be thankful for share two attributes: something that allows me to either enjoy life or get more out of it; something that I cannot realistically take credit for having.

Many of these things leap to mind, and I list some of them in no particular order:

What do you have to be thankful for?

Christmas is for Everyone

I recently found out that my friend who teaches at a public high school is indecisive about the separation between church and state. It took her a couple of moments, but she was clearly pleased that she thought of a good example of when it's appropriate to combine the two; Christmas. When I told her that Christmas was not religious, she didn't want to hear it. Maybe you guys will.

Christmas predates Christianity.
Obviously they didn't call it Christmas, but other folks did celebrate that time of year before Christians came along. Plus there's no reason to believe Jesus was born at that time of year, even if there was a Jesus.

Christmas is a national holiday.
If Christians wanted to keep it to themselves, they shouldn't have shared it with the whole nation. Plenty of Non-Christians celebrate Christmas in a Non-Christian way.

It seems to me that a Christian's home is ten times more likely to be decorated with a figure of Santa than a figure of Jesus. Santa is the guy you teach kids to pray to for gifts, and then grants these prayers based on his constant supernatural observation. If you think I'm being overly offensive, please remember the word prayer is not reserved for communication with a deity.

I think Christmas trees are more popular than both Santa and Nativity Scenes put together, and the bible uses a Christmas tree as an example of what not to do.

For most people, Christmas is about family and gift giving. How does that honor a guy who was against family, and material possessions? (References available upon request)


Yes, for some people religion is the primary focus of Christmas. I'm glad they enjoy that, and I'm glad that they're free to celebrate Christmas their way. I'm just saying I'm celebrating it my way, and for a change, I'm actually in the majority on this one. Oh, and Christmas is for everyone.

Posted by Benjamin No comments: